Learn to recognize the the standard approach of bowing as applied to typical rhythmic and melodic gestures.

One thing that orchestrators come to understand is that bowing is a lot like breathing, or like waves on the beach. The bow goes up and down – what a simple way of explaining the process – and yet that binary motion has enormous implications for phrasing and inflection. Downbow is like breathing out, or waves coming in: the greatest amount of force is applied at the beginning, after which strength gradually decreases. Upbow is the opposite: it increases in potential intensity as it gets closer to the end of the stroke, like lungs filling up, or the surf flowing back on itself into the next push.

I once recorded one of my string quartet works at a very slow tempo – 38 beats per minute. Since the soloist was to be added on later, the violist became the leader of the section (as the most experienced musician and with the most central part). Listening to the tape later, I heard that he was actually synchronizing his very slow breathing along to the flow of the phrasing. It was a devastating lesson in how close a musician can get to the music that they’re playing. The proof was in the recording – superbly synchronized with no lag anywhere, despite the glacial tempo.

Think of it as wind instrument breathing in a way, but with a bidirectional flow of air. This means that certain types of phrasing will tend to favor set approaches to bowing. If the composer has different ideas, then those ideas had better be justified.

The simplest and most basic phrasing in bowing is a quick breath in, followed by a strong breath out – or, up on the pickup note, and down on the downbeat. The excerpt below, from Beethoven’s 5th piano concerto, is scored perfectly for this bowing approach. Up-down on beats 6-1 at the start of the passage. The slurring of the pairs of notes thereafter allows the bow to fall into a natural up/down pattern, so that the sf note in the second bar may be hit hard on a down bow. 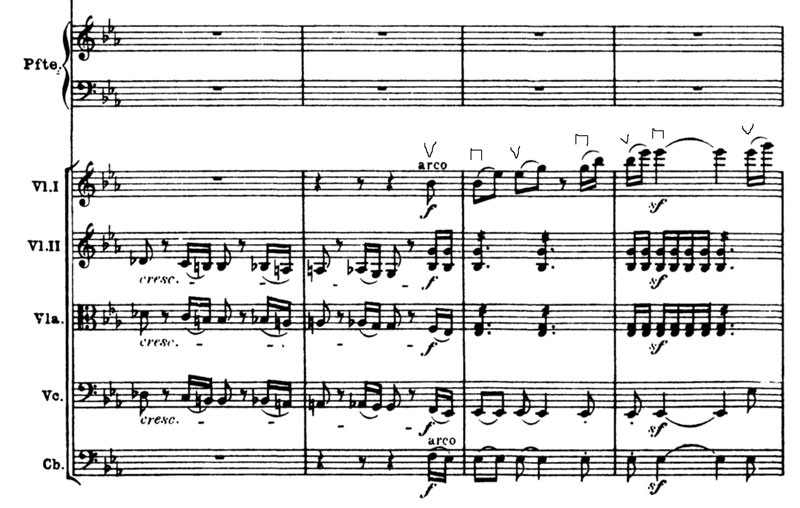 Here’s a recommended exercise for beginning orchestrators: take a famous passage of music for which you can find both a downloadable score and a live YouTube video recording. Mark bowings on the score for a few bars of melody, then compare your markings to what the players actually do.