Use slurs and articulation in a vocal, flexible way for a convincing style of string phrasing.

This tip also applies to wind and brass phrasing. A common approach for beginning composers is to use one type of articulation throughout a passage, or one type of slurring across a vertical texture, or to have all instruments rhythmically and expressively in sync at all times. This leads to overly homogeneous scoring, simplifying and blunting the edge of what might have started as a great idea. It also exhausts the listener, or makes them suspicious that the composer is just filling in a passage without much point.

The answer lies literally right under your nose. It’s called your “mouth.” Instead of just slapping a slur on top of something and having done with it, try this instead: sing it. Or, listen to your own speech patterns, and those of someone you know very well. How do words and sentences work? I’ve touched on the relationship of language to the intellectual content of musical phrasing – now, let’s go one further by paying attention to the actual sound and flow of speech.

What you’ll start to notice is that speech isn’t all a bunch of slurs, or a string of staccatos. Even when someone is making a point with a very repetitive or emphatic tone of voice, there are still skips, drops, inflections, and accents, all geared to transmit the meaning of the words with not only precision, but the speaker’s personality.

Now slide on over to your musical literacy. What great works do you know well? Go and score-read them, and pay attention to the variety of articulation and slurring in the phrasing of the string section. Also look at how the strings support each other with different types of expression and phrasing over the same passage.

Tchaikovsky was a master of expressive, vocal phrasing. Even his throwaway bits sing well. In the excerpt below from Movement 1 of his Serenade for Strings (p. 4, a few bars before fig. 3), a wide variety of articulation and slurring are present. The violins and viola are united in slur grouping at first, but those slurs syncopate, allow a staccato note, then slur into the downbeat, followed by rising staccatos. From there on, pay close attention to the viola part – which notes get slurs, which don’t, and why? The lack of slurs in middle instruments of the last bar is entirely intentional – Tchaikovsky wants the 1sts and the basses to slide away from each other, but he also wants to stress the rhythm from the center. These unslurred notes would probably be marked 2 upbows/2 downbows to match bowings across the section.

Look at the cello part in the first three bars. That is absolutely brilliant scoring. The low G will be played as an open string, allowing the cellist to play double stops off of it with the comfortable reach of a 6th, all within a tone or semitone of each other. I really like the slur followed by three staccatos – that is a great even bowing pattern, and it allows the cellist to hit the ff slur at the end of the third bar with a strong downbow. 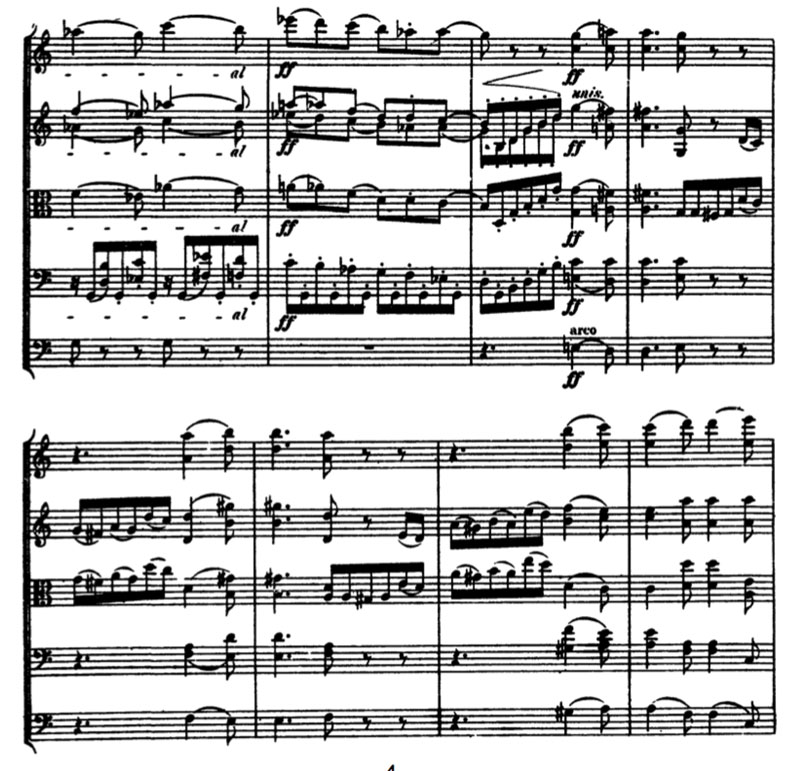