Composers on Camera: Song of Summer 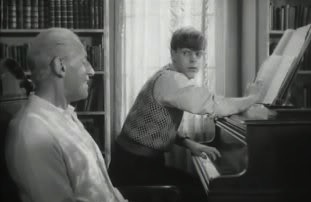 Recently I reviewed Ken Russell’s Elgar and The Debussy Film, which represent his first directorial efforts for BBC arts programming slots Monitor and Omnibus. Russell’s interests weren’t exclusive to composer biography. He followed up these early films with noteworthy retellings of the lives of artists in other disciplines, such as modern dance pioneer Isadora Duncan and painter Dante Gabriel Rossetti. Though these films were occasionally outrageous and always quirky by 1960’s BBC standards, they provided a wealth of opportunities for a developing director to hone his craft.

By 1968, Russell had achieved a certain level of mastery, displayed in evidence by the film Song of Summer, an adaptation of composer Eric Fenby’s 1936 book Delius as I Knew Him. Here Russell set aside all subjectivity, camera tricks, and innuendoes, seeking instead to capture the essential events and emotions of Fenby’s memoir. The result has been recognized by most critics, and the director himself, to be Russell’s finest film ever. In fact, it is one of the best composer films hands-down.

The story is actually quite a simple one. Fenby, a sensitive and gifted 22-year-old composer with an extraordinarily acute ear, is saddened by the news that his aging hero Frederick Delius has become paralyzed and blind. Impulsively, he writes to the composer and offers his services as amanuensis in transcribing Delius’s compositions if needed, without pay. To his amazement, the offer is graciously accepted, and the Yorkshire homebody is bound for France by the next ferry.

Within minutes of his arrival at the Delius home in artist’s colony Grez-sur-Loing, Fenby realizes that this isn’t going to be the sanctified mercy mission that he’d assumed. A sinister air seems to hang over the house, a sense of privacy and introspection that resists being disturbed by outsiders like himself. And then there’s Delius himself – challenging, masterful, and cantankerous to the extreme – and yet completely reliant on the assistance of a French maid, a German manservant, and his long-suffering wife Jelka.

Rather than abase himself with expressions of gratitude, the wily Delius immediately puts Fenby through the wringer, testing his musicianship, his willingness to handle abuse, and his ability to transcribe the composer’s off-key singing. But most important is Fenby’s honesty – will the young composer have the guts to stand up to Delius, and tell him when he’s composed a load of rubbish?

The film is supported by an excellent cast, but the major focus stays on the relationship between Fenby, played by Christopher Gable, and Delius as interpreted by Max Adrian. Both are remarkable in their roles. Gable is one of those actors who draws attention effortlessly, and holds it fast. He was fresh from a successful ballet career that had been stopped by a rheumatoid condition in his feet, and now was venturing into acting. His body language is superb, telling us volumes about the progression of the story that allow many minutes of voiceover and dialogue to be cut. Gable was to become one of Russell’s favorite actors, showing up in half a dozen more roles over the next decade in films like Women in Love and The Music Lovers.

Max Adrian was also a Russell regular, but from more solid British theatrical origins. He was sometimes cast in curmudgeonly roles, like his own one-man show about George Bernard Shaw. In his 1973 obituary in The Times, he was remembered for a voice that was “like no other heard on the English stage of his day, vestigially Irish and harshly attractive.” That voice is nearly all that Adrian has to work with in displaying a man in a paralytic condition, and the actor delivers a tour-de-force of aggressive brilliance barely masking a sense of futility and despair. Adrian’s role left such a powerful impression on the public that he spent the rest of his five years of life trying to escape the type-casting that came with it.

It’s worth mentioning the sympathetic acting of Maureen Pryor as Jelka Delius, around which character much of the emotional sense of the story revolves. Her anchor puts Delius’ instabilities into touching context, and gives Fenby some perspective and emotional release. Also quite refreshing is the wild, energetic cameo of David Collings (recognizable from Dr. Who and Blake’s 7 guest roles), appearing from out of the blue as the irrepressible Percy Grainger. It’s been pointed out that Grainger was a quarter-century older than Fenby, and yet actors Collings and Gable are the same age. But Grainger’s vitality at age 46 was much greater than many men half his age, as Fenby himself admits.

The direction is excellent throughout, and no attempt is made to dumb things down for a non-musician audience. Several scenes revolve around the work of transcription, and chart the development of musical ideas along with the evolving ability of Delius and Fenby to work together. These scenes portray exactly what it would take to verbally dictate an orchestral work – take it from a working orchestrator. I can’t think of any other way this process could have gone than what you see on screen. It’s interesting that the drama of such scenes was imitated by the final sequences of Amadeus, in which the fictional Mozart dictates the Requiem Mass to the fictional Salieri. But in Song of Summer, it convinces because we stand witness to something that really happened – for five years, one composer became the conduit through which another composer could transmit his final compositions.

And that music is fascinating. Delius worked hard to develop as original a musical voice as possible, one of the reasons for his withdrawal to the isolation of the French countryside. Though the basis of his style in pastoralism and impressionism is easily recognizable, the strength of his personality and the depth of his expression remain entirely unique. This is especially true of this final period of his creativity, and it’s very much thanks to his relationship with Fenby, which drew him out and forced him to apply himself through human contact rather than his own pen.

How realistic was the film in the end? So much so that it gave the real Eric Fenby a nervous breakdown after viewing. He’d worked carefully in pre-production with actors Gable and Adrian to coach them in patterns of speech, mannerisms, and interpersonal dynamics. The result was a film that perfectly recalled the trauma and triumph of those years, a journey his psyche was not prepared to relive (it took him a full year to recover). Ironic, that the greatest film by a director famous for hallucinatory subjectivity and pseudo-historical hysterics should be such a loving, down-to-earth, and entirely sympathetic and accurate portrayal of an artist at the end his life.

Educational value about its subject: ****

Incredibly informative about this period in Delius’ life, with important perspective on his whole career. Also very educational about the process of musical dictation. Finally, it elevates and preserves Fenby’s memoir, which might otherwise have lapsed into obscurity, along with helping to keep Delius’ music before the public ear.

Russell gets this exactly right – it’s a bittersweet coming-of-age story, where a youth passes into adulthood, and finally helps his own mentor and protector to define his humanity.

Not one wasted line, scene or frame.

Used with great psychological effect throughout, and realistically introduced.