The C-extension on the double bass’s lowest string is not needed most of the time, even uncharacteristic to the instrument in a way. It’s a common tendency for beginning orchestrators to fall in love with the basement-scraping abilities of the double bass, and score much of their early efforts with that instrument playing almost exclusively in its lowest octave. Along with this, it’s also typical for such parts to make free use of the double bass C extension, a little widget that attaches to the base of the lowest E-string, giving the bass a range down to the lowest C on the piano.

But here’s the truth – a well-written bass part is higher than your ear thinks. Because of the overtones favored by the shape of the bass’s frame, a note can feel lower. There’s also a generous amount of presence across the first two octaves of the bass, and the second octave is essentially clearer in pitch. “Keep the basses up!” say most orchestration manuals, and it’s a very good rule of thumb to use until you can put your finger on your own individual orchestral sound (of course, pizzicato notes are better the lower they get – don’t hold back if it fits the character of your arrangement).

The orchestrator has to really know – what are the basses doing? Holding down the bottom end solo, or in unison or octaves with the cellos? What kind of support does the rest of the music require? How loud or soft is the music, and how will the texture be affected therefore by a higher or lower pitch? Do you even need to add the basses at all? Your piece may be all the lighter and more vigorous for leaving the basses out some or even much of the time. And do your players even have C extensions? In many orchestras, half your bassists will, and half won’t – meaning that low D or C will either end up sounding as an octave (a bit thick) or with only half the projection.

I almost never feel limited by the standard lowest pitch of open E. In fact, I rarely score below G at the bottom of the staff. Not by design, just because that’s where my signature sound needs the bass to be. I sometimes find it surprising when I’m scoring a low F# or F – then again, I’ll occasionally use the resonance of an open E string for a particular effect – more about this tomorrow, when I’ll address the overtones of low bass notes, particularly with open strings.

So, in the final analysis, the C extension is there because of grand, huge scoring by orchestrators taking a maximalist approach. You should use it only with caution, and indicate a higher note in brackets as an alternate for bassists without it.

The excerpt below, from movement one of my harp concerto, shows my approach to double bass writing. There are a few rock-bottom notes after K, but the center of gravity is an octave higher for the most part. At bar 153, I hit the open E’s hard. Notice the descending passage from K – at the end of bar 161, I jump up a 7th from low E to D – this is a typical compromise, to keep the illusion of a descending line going. At bars 152 & 165-166, there are two gestures that take the bass up to F#, then to high G. As I mentioned yesterday, this is quite an effective range for bass, and adds tension and impetus when scored correctly. 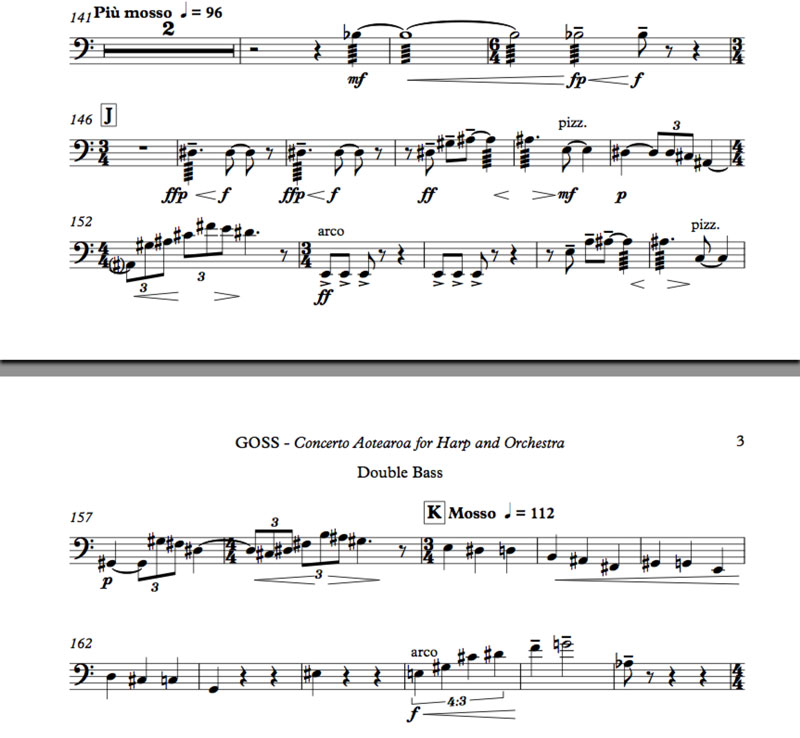