Be mindful of range when scoring stopped horns – the best notes are inside the treble staff. The higher the pitch above top G, the greater the risk of cracking. The lower the pitch below middle C, the flabbier the tone. It’s interesting that neither Piston nor Adler (or most other texts) address the issue of range with horns, with the inevitable result that horn players are either snickering at or groaning about playing incompetently-written stopped notes.

While it’s true that Tchaikovsky and others wrote very low stopped pitches, the truth is that even with today’s modern stop-valves, such notes are extremely unsatisfying to play, and uncertain unless the player is of top rank.

Here’s the truth about it – if you really want that snarly tone, that forceful, raspy effect at its very best, then write stopped tones between written G in the staff and top G. You may also descend as far as middle C with most orchestral horn sections, and still get a satisfying sound. Lower than that, the stopped tones gradually become weaker and weaker – so you can still write for them, and they can still be played, but don’t expect any fireworks. A stopped ff accent at written C below middle C will sound more like a sick cow than a blaring, sinister note.

In the example below from the first movement of my harp concerto, note how the first horn line is right in the sweet spot for the first two bars, supported by horns II & III playing harmony. Then things get a little lower than optimum, but note that I’ve scored the descent into a decrescendo. The picture of danger flashing on the horizon then fading is complete. 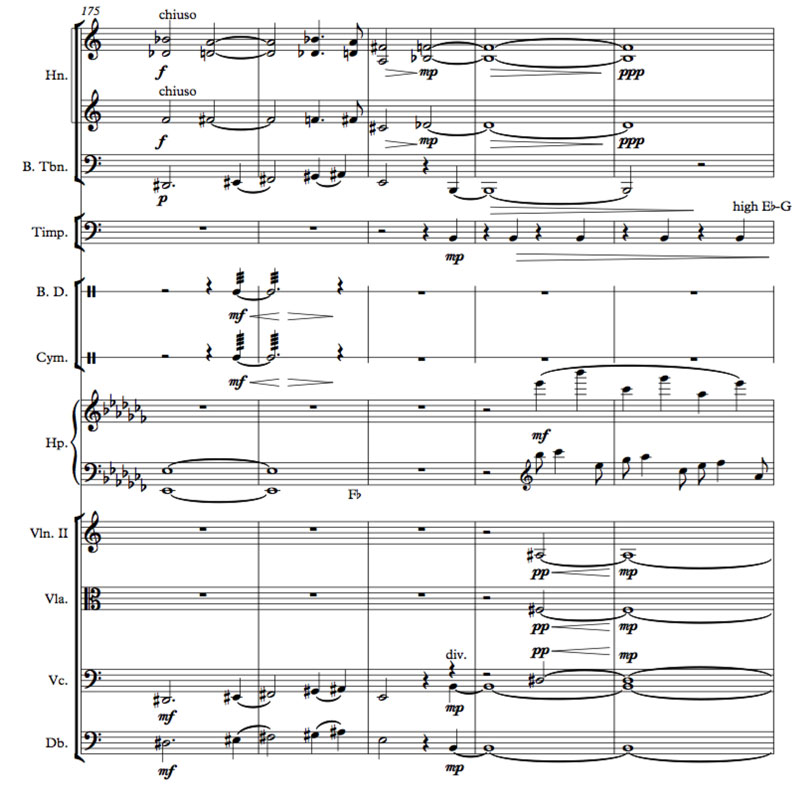 Stopped horns can get very soft indeed – in fact, a lot of players will ignore mute markings on some passages and use hand-stopping instead. Though mutes and stopping are two different timbres, in a thicker texture the horns can get away with it and often the composer won’t even catch it. I’ll address the issues of mutes vs. stopping tomorrow.

Meanwhile, look at this page’s simple (but I think very effective) scoring. The basses and cellos at mf, tone rounded slightly by the p bass trombone, in contrary motion and varying the harmonic rhythm, then settling on a low B which starts the backbeat pulse of the timpani. The written Bbm chord (concert Ebm) in the fading horns folds seamlessly into the enharmonic D#m chord in 2nds, violas, and divisi cellos as the harp drops glittering from the sky. Distant thunder from the percussion, then gentle rain on your face as you look out over the cliff.