The “horn pad,” once thought obsolete and to be avoided, still has possibilities for the imaginative orchestrator.

From the Late Classical through to Romantic Periods, composers would often employ what’s come to be known as the “horn pad” – 3-part and 4-part harmony sitting softly in the background, while the strings or strings+winds dominated the texture. The idea was that ability of the horns to disguise themselves, plus the prominence of the their overtones, would result in a rich, golden tone from the whole orchestra. You wouldn’t actually hear the horns, but the action would have a harmonic richness that wouldn’t otherwise occur.

Gradually this idea fell out of favor – not that it was considered a cliché necessarily, more that it was old-fashioned. But recently it’s been making a comeback in certain scores. Probably the most prominent example would be the TV cues of composer Dennis McCarthy, who was lead composer for most of the Star Trek reboots of the 1980’s and 90’s. He evolved a certain sound that all orchestrators for those programs had to follow – prominent strings, 6-8 horns, and limited use of heavy brass and winds. In the cues from these shows, the composers would often set the horns softly behind the strings as they made a strong musical point. There are examples from other cues of composers like John Williams and Jerry Goldsmith – sometimes in recapturing the old Romantic sound, and sometimes in new and innovative ways.

I myself use this trick from time to time. If you understand the basic principles, then you can vary it in different ways. In the following 2-page excerpt from my New Zealand legend “Maui’s Fishhook,” the music is gently sloshing and murmuring, depicting a canoe that has been swept out to sea, and is now teetering uneasily on the restless waves. The marking for the strings is mf, and the horns are sitting behind their interweaving lines with a series of 9th and 13th chords marked at p. On the second screen cap, you see them emerge from the texture momentarily, coloring the sound in a radiant way, before subsiding again. 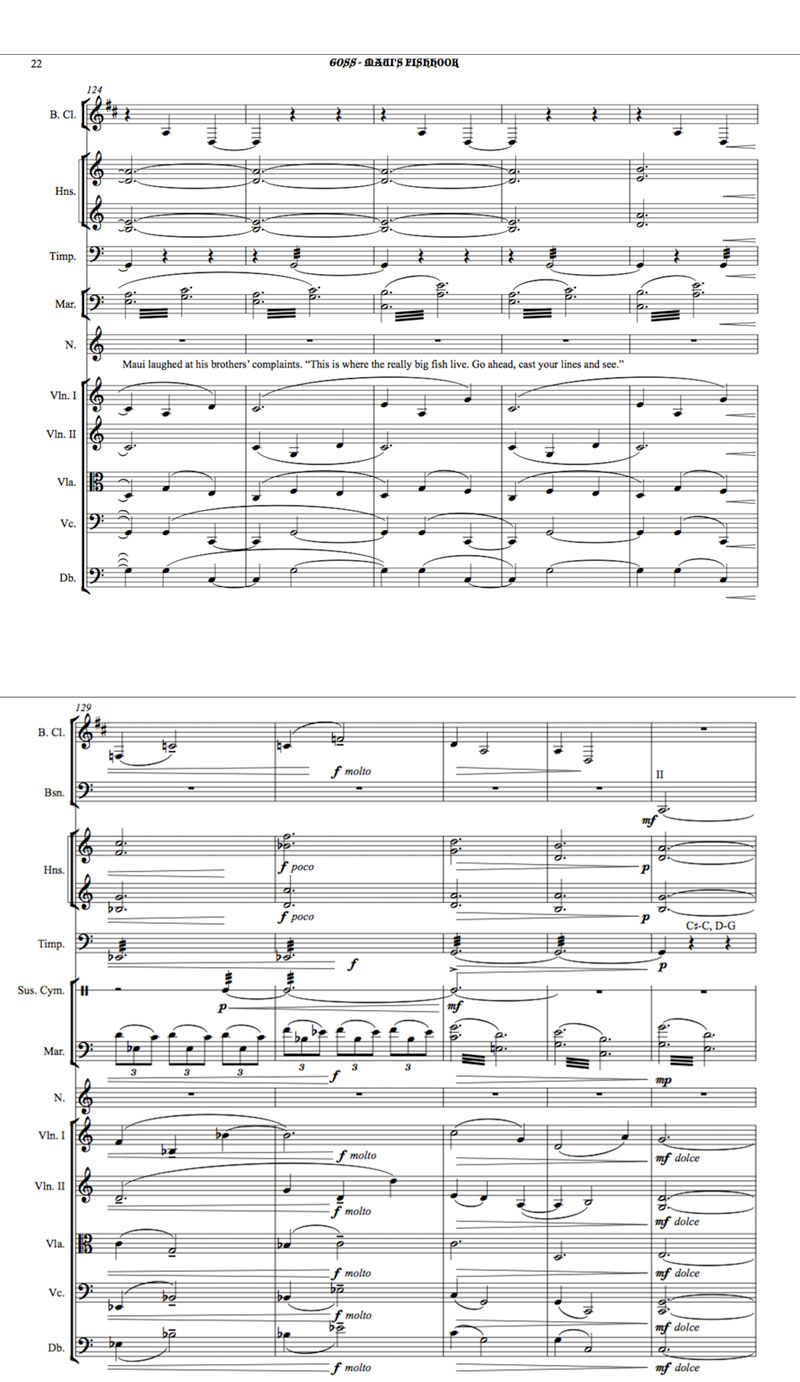 This is only one of many examples – another thing I’ve done is to have the strings in widely spaced intervals of 4ths, basically forms of 11th and 13th voicings, and have the horns play the other parts of those chords. The overtones fill in the gaps between the strings, creating the illusion of clustered tones. So my feeling is that this is a texture that’s barely been explored – don’t chuck it in the bin quite yet!

(but don’t overuse it either, ahem)

One response to “Horns – Rethinking the “Horn Pad””