Oboe – Slurring Up vs. Down

Slurring up on the oboe is always simpler than slurring down.

The above is a very simple statement for a complex situation. Slurring up implies a certain tightening of the embouchure, while slurring down is the opposite. But as we’ve seen with the horn, it’s much simpler to increase pressure smoothly than it is to relax it. The process is even more problematic on oboe, as the abdominal muscles will be maintaining constant pressure, which may also be flexing slightly for vibrato, and yet subtly shaping the phrase so that certain natural defects don’t occur.

The worst of these defects is called “bulging.” There’s a natural tendency in slurring for upward slurs to crescendo slightly, and downward slurs to decrescendo. In a phrase like the one in the excerpt below, from the first movement of Brahms’s 1st Symphony, an inexperienced player might bulge the dynamics with every peak note. Brahms could not have but known that he was setting a trap for the oboists of his day – as even an expert would struggle to keep such a phrase clean, with an uninterrupted dynamic arc throughout.

This trap is made all the more dangerous by the downward slurs of ever-widening intervals, which though far from impossible still require care to work into the flow of a phrase. At the end of yesterday’s tip, I commented on the intuitive wisdom and generosity of Bach’s oboe scoring in the Brandenburg Concerto No. 1, part of which was to be found in the intervallic closeness of the melodic phrasing. The only big leap there was an upward jump of a diminished 7th, from C# in the staff to B-flat above. That is no big deal – oboists can fold that jump right into the flow of the phrase. However, it would be a different story should that interval be reversed – not so easy now, with real care needed to come out of the phrase elegantly.

Not that any downward-slurring gesture of a wide leap should every be avoided – rather, the composer should at least be aware of the natural quirks involved here, and the demands of phrasing for the oboist, which are considerable. Score whatever you want, but then craft it into something that the oboist will be willing to sacrifice time and effort on. Don’t just fly blind, especially with oboe – there are just too many throwaway solos for it by composers who didn’t do their homework. 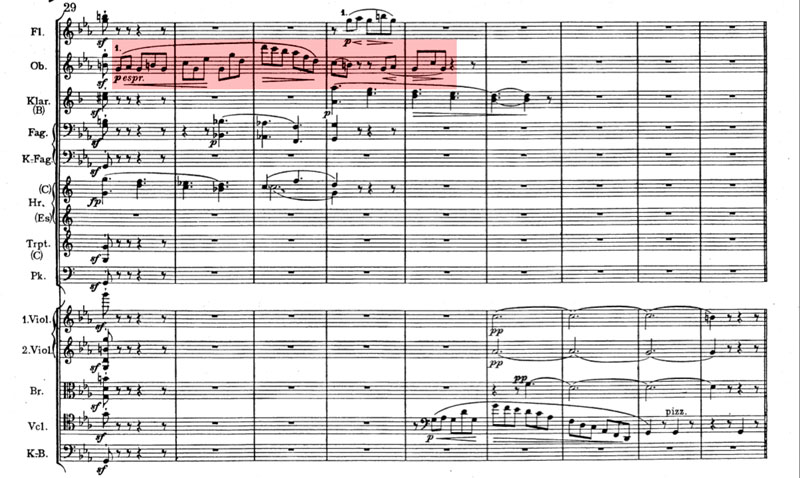 One response to “Oboe – Slurring Up vs. Down”