Use the oboe’s seemingly endless ability to phrase to its best effect in constructing powerfully phrased episodes, but never take it for granted.

As I mentioned earlier this week, the oboe is a remarkably small device driven by the overpowered engine of the player’s breath and embouchure. In some ways, it’s the opposite of the tuba. Instead of speaking easily but requiring huge amounts of breath, the oboe has a very delicate, focused approach to breath, which is slowly forced through a very small opening. This force is kept constant by the use of the player’s abdomen – in essence, one’s gut is constantly pushing at a tiny air passage.

This means that the oboe has the ability to play one long phrase with a single breath. That’s what all the orchestration books say – but what they mostly neglect to add is that such breathing is actually essential for continuity. At times, it’s better NOT to divide the flow of a phrase with breath marks, but to keep the pressure constant. This allows the player to form the optimum expressive arc as one idea in one effort.

This takes enormous planning sometimes. The oboist has to look over certain solo passages and decide how much breath will be needed, where the most push will occur, and even whether or not to obey the composer’s dynamic markings (which may be unrealistic or which may betray the player’s efforts). That’s where the composer’s responsibility kicks in – you must intelligently assist the oboist in shaping a coherent, playable line, with emotional logic and carefully balanced proportions.

That’s the bridge between the first piece of commonly used advice about the oboist’s ability to play long phrases with one breath, and the equally common second piece, which to not tire the player out with too long a phrase or too many in a row. The oboe isn’t a bagpipe, with unlimited constant breath. The player must be able to carefully think ahead, play something exquisite, then collect themselves. It’s not the constant patter of a salesman – rather, it’s the ardent expression of a rather shy lover proposing. One can’t just turn it on and off like a spigot.

The excerpt below is one of the most famous in the repertoire – the opening oboe solo from the second movement of Bach’s Brandenburg Concerto No. 1. Try an experiment. Score-read it now in your head, or along to the music. As you do, purse your lips rather tightly, and breath out a forced, tiny stream of air, pushing strongly with your abdomen…for the length of the entire solo! That will give you an appreciation of how oboe solos work, and why you shouldn’t abuse their awesome powers of continuity.

Now look over the solo once again. Note how there’s essentially no place to sneak in a breath without it sounding obvious, even if the player wanted to. But the player is assisted by the solo being placed right in the sweet spot of the oboe’s range, the middle of its second octave. Bach also helps the soloist by making almost every single interval a melodic second, with a few thirds and only one big skip, a diminished seventh at the start of the fourth bar. That simplifies the player’s task immensely – the reasons for which we’ll examine in the next tip. 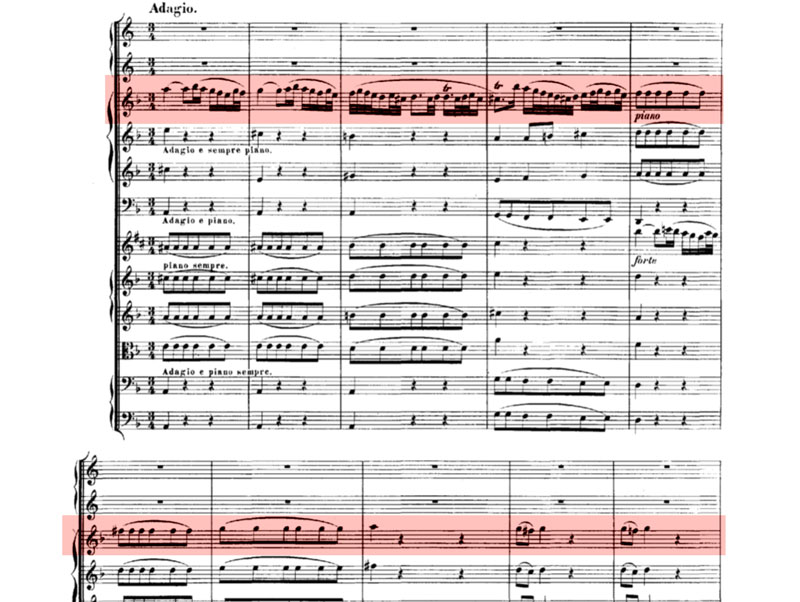