Be aware of the problems of dynamic control represented by the oboe’s lowest register.

It’s been said by some orchestration teachers that the oboe represents the opposite dynamic characteristics to the flute. As the the flute gets lower and lower in pitch, it becomes ever softer and more delicate, while the oboe gets louder and coarser. The proof of this is in how older-model oboes in the 20th century lacked the low B-flat. It was probably rationalized that the note would be so seldom required as to be an unnecessary addition to the instrument. And that’s actually not a bad excuse – the oboe’s low B-flat is – to put it politely – “unusually pungent.” To put it rudely, it squawks. There’s no way to play it gently or as part of a flowing phrase, unless the player is some sort of specialist. It’s a hallmark of inexperienced scoring to see a low B-flat on oboe with a pp marking in front of it.

The Russians and French have got it right here. Go look through their scores for any example of oboe pitched below Middle D. Examples are far and few between. But passages in that register for English horn are plentiful. There seems to be a rule of thumb at work in which the lower instrument is used, even when the notes are comfortably within the higher instrument’s range. This is true of Stravinsky in particular – in his first three ballets, the English horn increases in use, until finally in the Rite of Spring it’s practically the lead instrument for most of the winds.

But here’s the thing – when the lowest oboe register is used intelligently, it’s a powerful resource for composers. A perfect example is the passage below from Mendelssohn’s Overture to A Midsummer Night’s Dream. Go and score-read it to the music. In this passage, the oboes play a little harmonic passage going back and forth in chromatic thirds. The lowest note is C-double-sharp in second oboe. Despite the fact that the other instruments around them are playing quite loudly, the oboes stand out comfortably in the texture. Typical Mendelssohn – despite his conservatism, he had the makings of a brilliant orchestrator. 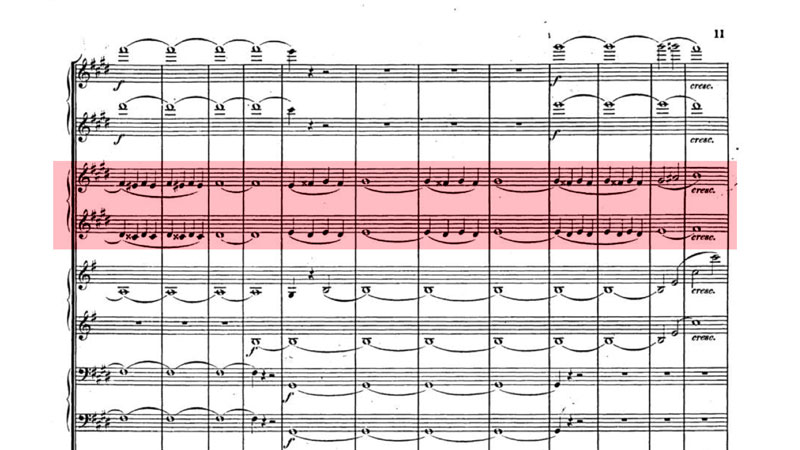