Be aware of the extreme precision of oboe articulation, and use it to its best effect.

There’s a certain default position about oboe in the minds of many beginning composers – to see it mainly as a lyrical resource. While oboe is one of the most expressive of instruments in emoting a legato passage, restricting your oboe parts to only playing cantabile solos is a wasted opportunity. Actually, oboe is also superb at articulation, perhaps the most well-defined instrument in the orchestra.

This is because in comparison to the other standard winds, the oboe is a somewhat overpowered instrument, like a small-body car with a V8 engine. The small size of the reed and bore of the instrument are almost overwhelmed by the capacity of the player’s diaphragm and embouchure. This proportion is intentional, helping the oboe to shape a phrase with a unique degree of finesse.

This is especially true with accents and staccato. The oboe can get many degrees of shading from these articulations, from a soft, pulsing tenuto to a hard, biting marcatissimo – and every possible accent between. But the best effect of all is staccato. Even with the customary single-tongue attack, oboe can rattle off a string of staccatos with relative ease, each separate note clear and clean.

With that kind of resource available, it really behooves the student orchestrator to get off his lazy semibreve and listen to many examples of oboe scoring from the masters, comparing how different oboists play the same passage, and listening for different types of articulation (some of which isn’t written in, but implied).

The excerpt below, from the solo part of Mozart’s E-flat oboe concerto, contains several examples of staccato. The top highlighted passage, marked p on the previous staff, has a series of mezzo staccato bars – a lovely effect involving a kind of lifting between notes rather than a complete separation. On oboe, this is especially poetic. Further down, the same effect is used, but at three times the speed. Then at the bottom, I’ve highlighted yet a third passage, this time a run of normal staccato triplets at pp. This whole concerto would be a good work to start with, even though the IMSLP files only contain the piano score and solo part. The extreme delicacy and control of sections like these is highly instructive to the possibilities of oboe, far beyond just spreading melodic Nutella across a score. 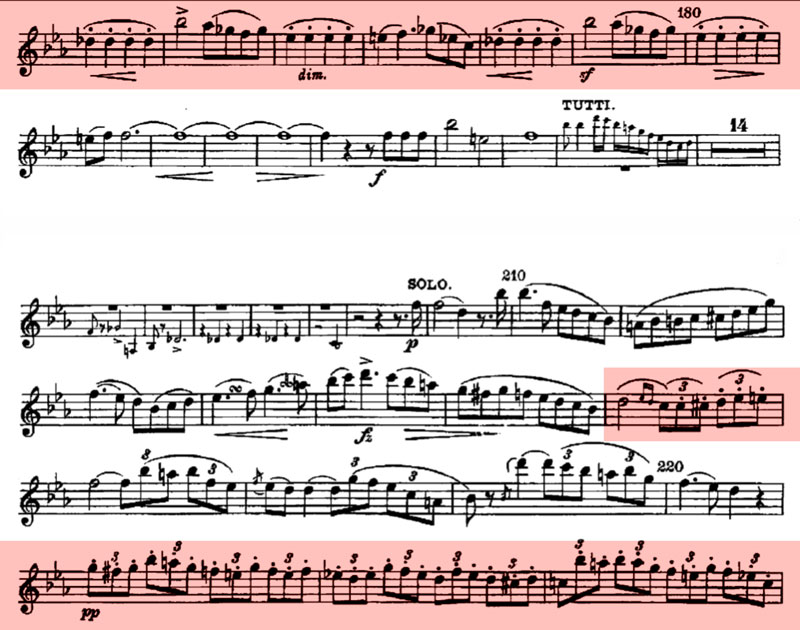