The best, most characteristic sound of the oboe comes from its middle octave-and-a-half: from F at the bottom of the staff up to B-flat above.

This week’s tips on the oboe have covered phrasing and breath issues, along with extremes of range (the upper limits of which we’ll explore in tomorrow’s video tip). But it’s worth writing a few words for you about the optimum range of the oboe, and why it’s the best place for 99% of all scoring.

First, let’s define that range: first-space F up to first ledger-line B-flat above. That gives you 11 diatonic or 18 chromatic pitches with which to score. You’ll find that if you go through most orchestral scores, these boundaries are taken as a general neighborhood for oboe parts, with a few notes here or there stepping over the line. Some higher notes are used in doubling high string lines or building wind harmonies (and every once in a great while, a solo, which we’ll explore tomorrow). Some lower notes are used in very strong passages. But this middle range is the test for an orchestrator: using it well and as a home base shows that you respect the oboe’s essential character (not to mention the player).

Why are those notes the best? Simply because the whole instrument has been designed around that range. Consider the oboe d’amore, an auxiliary that’s used occasionally in Debussy scores, the Bach Christmas Cantata, and so on. This instrument, though it’s designed for a lower effective range than the oboe, actually can only reach a whole-step lower to A-flat below middle C – yet it’s been designed to play those lowest notes with grace and lyricism. The oboe can’t do that – but no other instrument in its family can approach it for those qualities within its own optimal range an octave higher.

What this means in practical terms is that embouchure, breath control, intonation, and dynamic smoothness are all at a premium here. It may be an effort to control the forceful mechanism of the breath to get that beautiful flowing, chuckling sound, but the struggle pays off most rewardingly in that range. At the extremes, intonation problems abound, but in the center, the pitches tend to line up in agreement by comparison. And best of all, the strength of the notes is more even, with fewer pitches that want to leap out at the listener over the flow of a phrase.

That doesn’t mean that this range is homogeneous by any means – but the differences of shading as pitches rise and fall may be used to their best advantage by a wise orchestrator. Today’s excerpt is from one of the top five orchestrators of the early 20th century: Richard Strauss. The first few pages of his early masterpiece, Don Juan, are enormously loud, especially for winds – and especially for oboe. At such a blasting dynamic, it would be easy for the oboe to be covered by the other instruments, or for it to lose control. Neither occurs, because of the superb way the part is scored. I recommend score-reading this work with an eye on the oboe part, and note how much it stays within the prescribed range – and how well it uses that range. When the part goes past these boundaries, look how the extreme notes are supported, doubled, or harmonized – also, what is their dynamic, articulation, and phrasing? This will really help you in your own scoring, to write an intelligent part that maximizes the potential of this unique, often misunderstood instrument. 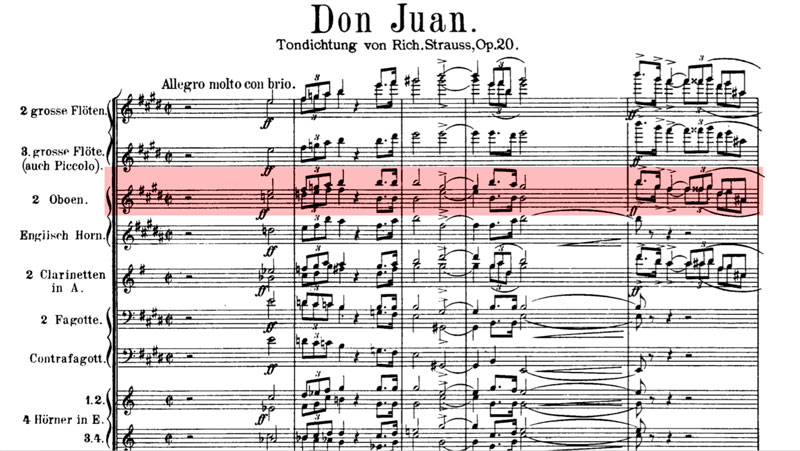 « Oboe - Slurring Up vs. Down Video Tip of the Week: Stratospheric Oboe Solos »