Cellos need not always play octaves with the basses. A very powerful sound can be achieved by doubling the instruments in unison.

In most classical scores, double basses in cellos get a single line, and are expected to play that line as written – which means that the basses will be playing an octave below the cellos most of the time, unless the composer writes “senza bassi” in the score to indicate that the cellos should play alone. This perpetual octave fills in a lot of harmonic space, especially as the cellos essentially become the 2nd partial to the bass’s fundamental note. This means that the 5th and octave above the cellos will be felt by the ear, even if not exactly heard.

However, in general I only use score bass+cello octave about 30% of the time or less. About 40% of the time, the parts are independent, and the rest of the time the basses are either absent, or playing in unison with the cellos.

A bass+cello unison has a decidedly different tone. In a sense, the basses are really adding to the cello tone, rather than the other way around, because the brighter sound on shorter strings will dominate (unless the bass section is truly enormous). This is also a good way to “keep the basses up,” as is so often recommended in orchestration manuals.

There are many ways to double – not just with both sections playing exactly the same notes. The basses could play sul ponticello, or tremolo, or even pizzicato, while the cellos play with regular bowing. In this case, I feel that it’s better to have the basses contribute the specialized technique, as their greater size will give those effects a richer sound (especially pizz.).

But a firm, loud low note played in unison has a markedly different quality that an octave, because the single tone is stronger and more complex, while the overtones are more open. You will feel the second partial more than the third and fourth, and actually higher partials may stand out more depending on the resonance of the hall and the pitch of the note.

In the sample below, from my legend for orchestra “Battle of the Mountains,” the cellos and basses are playing unison fp crescendo on A. Here they are doubled by rolling timpani, tuba, and bassoons. This unison could have been stretched out across an octave by all the instruments, but by joining them together, the central brass chord is brightened in tone and pushed more strongly in crescendo – especially with regard to the sudden down-sweeping gesture at the end. The result is a splashy beginning that rips at the listener and knocks them off-guard rather than sounding too profound. 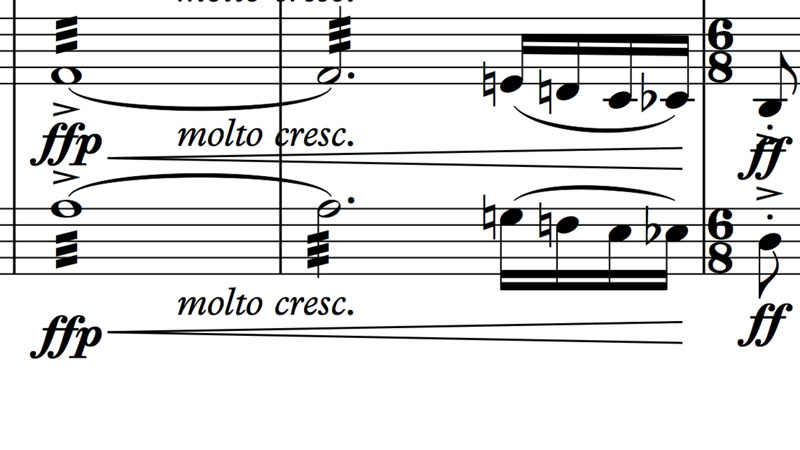