Cello – Registers as Defined by Clefs

The three different clefs used by the cello serve as natural boundaries to its three essential registers.

The cello has three main registers, which correspond quite well to both vocal ranges and their respective clef signs: bass, tenor, and soprano (actually treble clef). A wise orchestrator recognizes that these clefs do more than just setting a comfortable range within pitches may be written and read. Rather, they convey as certain sense of location, from which a specific type of sound, not just pitch, may be executed.

Let’s start with the bass clef. In essence, the range of the notes following the bass clef in the example below are those of a bass-baritone: from C below the staff to E above it. Though the cello is of course stronger and more secure throughout all the notes of this range than the average baritone singer, there are still many similarities: an ability to force the tone in ascending phrases, as well as a complex timbre created by rich vibrato on lower notes. There’s also a sense of solidity that parallels a lower vocal range. In the cello, this is because the notes are all being played in lower positions, no note needing to be played any higher than a 5th above any open string. Consequently, the strings can be at their greatest possible length and resonance for any given note of a phrase.

Now jump up to tenor clef. The range here is somewhat smaller. Sam Adler actually quotes this clef as being useful essentially for reducing ledger lines – but that is a mistake. The tenor range is actually a unique register that has its own logical range or tessitura. It’s not merely notes played higher. In the example below, I show the lowest note of this range as being the bottom D line of the tenor clef. This is not because it’s simply the lowest note of the staff – actually, it represents both the pitch of the open D string, and the first note of fourth position on the G string. One has to assume in tenor clef that either notes will be played only on the top two strings, or that notes will be played in higher finger positions on any string that fits a certain arc of phrasing and bowing across three strings. Either way, the sound will have a more intense character, very much like a tenor voice, due to a smaller average string length and greater tension. If the part one is composing uses all the notes of this register, occasionally going up to the high B and beyond, then this clef should be used throughout the passage – not just stuck in here and there when the ledger lines get too high.

Finally, there is the soprano range in treble clef. Just a quick word of warning here – the treble clef in older scores from the mid-Romantic and before show soprano clef as transposing down an octave, so watch out if you’re reading a very old engraving. With treble clef, notes from C in the staff and up are a general benchmark for justifying its use. To play these notes, a cellist must either be very high on the A string, a tight, but sweet tone with the right application of vibrato and bowing; or playing natural and artificial harmonics, a more glassy, distant tone. In both cases, the voice of the cello ascends to a new level of range unlike that of either the bass or tenor.

So next time you’re scoring cello lines, consider the clefs not just as pitch markers, but more so as guides to different registers – areas of the cello with their own unique sound and possibilities. 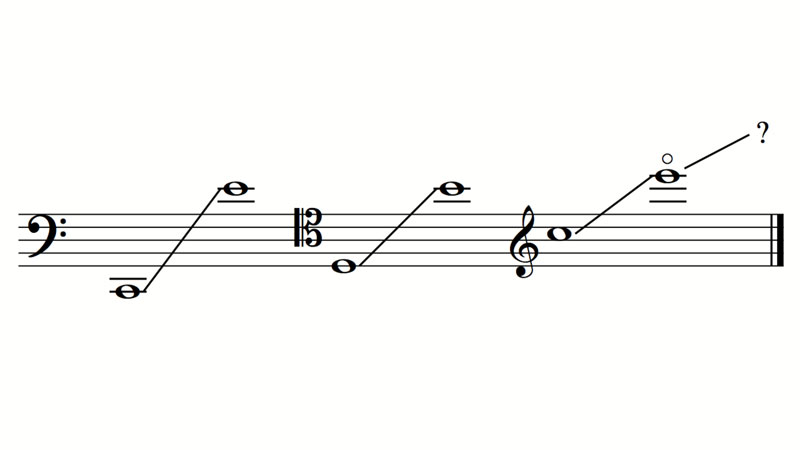