9:30 p.m. This time seems to be turning into journal hour. I had a fairly productive day, scoring Sharon Corr’s “We Could Be Lovers” in three and a half hours, writing an article, and transcribing a piano part – about 8.5 hours all told.

Though I didn’t wake up at 4 or 5 a.m. like I’d hoped, I still got going fairly early at 6:30. It’s funny how the size of the orchestra can have a direct effect on my bodily position and work area. For a huge score, I’ll sit upright at my studio workdesk in front of the vertical screen, going as fast as I can most of the time. But for a smaller-scale piece like today’s score, I just lounge around in bed or on my futon couch, working a little more leisurely but no less committed.

I’ve scored quite a bit of orchestral music in bed, actually. It’s easy when the view is a half-page’s worth of staves. In this case, I scored for strings, winds, horns, and glockenspiel. That adds up to 13 staves when you include the reference staff with the vocals and chord changes, easily visible on a 15” laptop screen. And how fitting when the subject of the song’s lyrics were about doing something unauthorized in bed, ahem.

When working with artists like this, an orchestrator is usually given a reference track recorded at a recent concert, or even more common in the day and age, a YouTube link. In the case of “We Could Be Lovers,” my reference was a live performance on “The Voice of Ireland,” a reality TV singing competition show (for which Sharon Corr used to act as a singing coach). Live tracks are always better than studio tracks – it shows you what moments in the song bring forth which emphases or inflections from the performer, and how the live arrangement works. Most important, it usually has a working song structure which can represent years of refinement on stage, which the studio version rarely shares unless it’s off a first album (which would usually consist of existing songs that are a couple of years old).

The intro and verse have a stripped-down sound, with a thumping kick and steel-string acoustic guitar. The scraping of the pick on the guitar strings set up a clicking, scraping groove that I could use. So I assigned the bass line to pizzicato double basses, and – first time for me in a crossover score – used col legno battuta in the cellos and violas to replicate that clicking sound. I also added touches of color here and there, with flutes playing low register under violin harmonics.

In the live video, Sharon Corr is accompanied by a small string group that’s limited to playing a unison octave countermelody on the choruses, and then a little offbeat riff in the break along with her on solo violin. But we wanted something bigger here. So the cellos and violas got the countermelody doubled by the lower winds, which made it much fuller of a tone. That also freed up the first and second violins, who helped to open up the harmony into something a lot bigger, and even double the vocal melody in the last chorus. 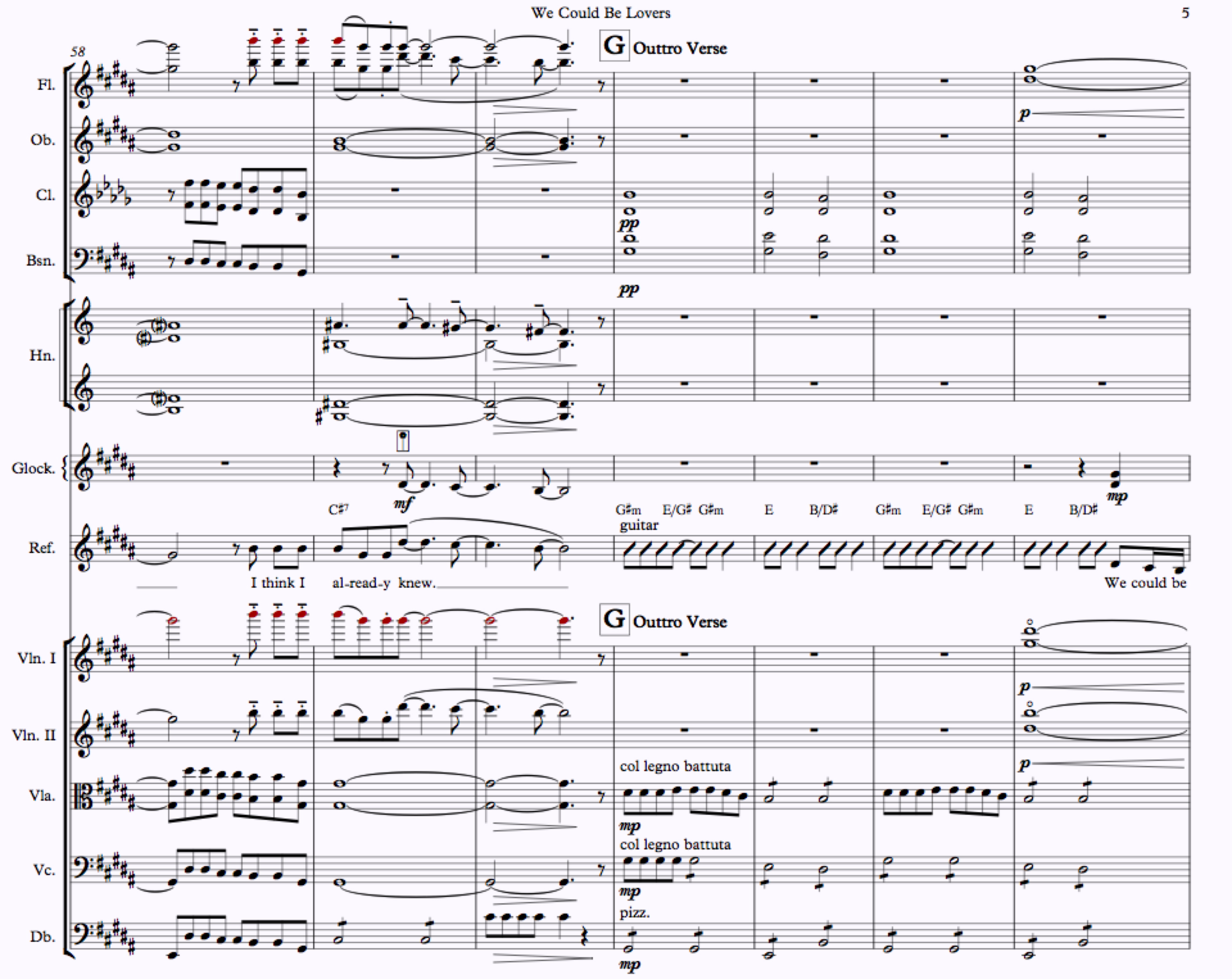 Finally, a touch of glock was used at the end to replicate the sound of guitar harmonics and bring the phrasing of the last chorus to a close. This is one of those cases where the player sits around for three minutes and then plays about three bars – but percussionists are used to that type of work, and it really pays off to add that bit of ting at just the right spot.

The scoring went even smoother and faster, bar for bar, than Tubular Bells. If that score was like butter, this one was like gravy. I had so much time left that I was able to quickly dispose of my bimonthly article in New Zealand Musician Magazine, and then get on to the next bit of scoring.

I like to do the most creative work as early in the morning as possible. From there, I’ll sometimes roll right on through for the rest of the day if the momentum is strong. Or I’ll knock off after lunch and do some busy-work of preparing or transcribing. Today it was transcribing the piano part for Mel C’s cover of “Both Sides Now.”

I had an interesting reaction yesterday by one or two Orchestration Online Facebook group members, who wondered what was the usefulness of an exhaustively-notated reference staff. And indeed, a lot of arrangers write the barest minimum of information in their scores. But in this case, I have three very good reasons, which I’ll repeat here.

“It’s very important for three people. 1.) the conductor, who needs to coordinate the orchestra with the band; 2.) the music director, who may need the reference staff of the score to rehearse and direct the house band and backup vocalists, and 3.) the orchestrator (me), whose arranging style depends somewhat on interconnecting gestures like this to create as powerful a score as possible.”

Well, in the case of “Both Sides Now,” such attention to detail was even more important than usual. Mel C’s arrangement is for piano and chamber strings plus vocals, and it’s a very smoky, mildly rubato mood at 76-80 beats per minute. What’s more, the piano part, though obviously improvised, still fits right into what the strings are doing, and leading Mel C in very subtle ways. I’m betting that she listens for certain things in the piano part that give her what she needs to form the clear and compelling interpretation she delivers live. So there’s really nothing for it but to transcribe the piano part. It’s also a gesture of gratitude to the music director for assigning me this best-of-songs on the whole evening’s program. He can use this part to get right into the original interpretation so as make Mel C feel right at home with the least amount of uncertainty.

Because uncertainty must be eliminated at all costs. Here are the logistics: Mel C and the MD will be basically playing a duet, with the piano following her emotional arc quite carefully. The conductor, meanwhile, will be listening to both of them, and guiding the whole orchestra carefully through all the nuances of dynamics and tempo. I have to make it possible for them to do their jobs, so all the audience hears is the magic, and all the artist hears is support and inspiration. 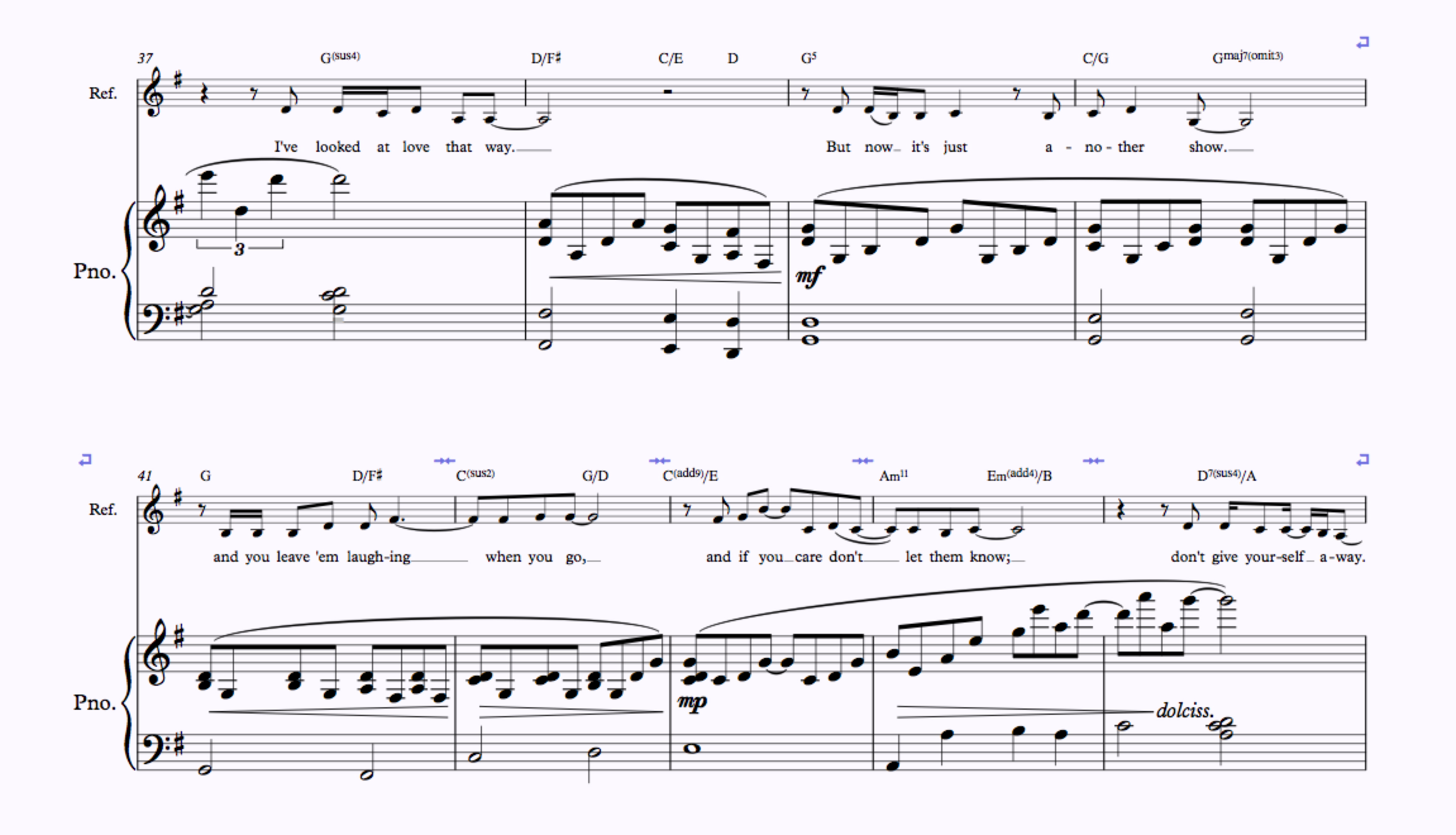 The transcription therefore was painstaking, but helped by the fact that the pianist has a very similar approach to me harmonically and technically. I like to use big 9th and 13th chords, carry over upper harmonic functions into suspensions as the root moves around, and go for ambiguous, punch-pulling climaxes. So it made things a lot easier to fill in sections that were a bit unclear on the recording, or that needed to be adjusted in order to help lead the orchestra better. In the end, once the MD has rehearsed it with Mel C, he’ll make his own stylistic changes, but he can do so with all confidence.

Tomorrow is my last day of solitude, and I’m still not sure what to work on when I wake up. It will either be Billy Ocean’s “When the Going Gets Tough,” or “Both Sides Now.” Whichever song, I’d like it to be a straight shot, with the whole song finished by the end of the workday. So I’ll let the moment decide itself when I sit down to work. And now for that other thing that beds are good for…