Woke up this morning, rolled over, and felt the bed flip over onto the floor. No, it wasn’t another earthquake like the one we had a few days ago (only 6.3). As I found after a trip to the doctor a couple of hours later, I’ve got a nasty bug on the inside of my ear. Not much I can do to stop the rolling, other than to let it work itself out, try not to move very much, and take anti-nausea meds. So no work today.

Once again, I’m a few days behind on my journal. So let’s rewind back to Monday morning, when I woke with the choice between scoring two very different songs. A good night’s sleep got me ready for the obvious, high-energy choice: “When the Going Gets Tough” by Billy Ocean. As those familiar with the song will know, it’s a fast rock shuffle with typical 80’s pop synth brass riffs, though like any hit there’s more going on under the surface: cross-rhythms, a rolling, syncopated bass line, and some very cool vocal vamping, at least in the latest live version.

It was fun to watch Billy Ocean perform this tune on YouTube at the 80’s Rewind Festival 2011, which was also our reference track for the arrangement. I hope that I’m that happy at 61 years old. He’s got some great positivity up there on stage, and a true ease and fluidity. It probably helps to have tens of thousands of people singing your verses back to you, which the mics pick up quite well, a rich chorus of British accents counterpointing Ocean’s mild Caribbean tones. All of that contributed directly to the excitement of scoring the piece, which held me in my chair for 7.5 hours plus a couple breaks. I wasn’t able to get the whole thing done in one day, but I made it through quite a bit of the 6-minute, mostly tutti scoring.

To flesh the song out to a concert length, Billy Ocean repeated and developed what’s already a somewhat atypical song structure:

Altogether that adds up to 195 bars, possibly the longest score so far in terms of both measures and minutes. I was told by the MD that he’d be covering a lot of the synth brass figures. So I made these very full, so the whole strength of the orchestra will be behind them. The bridge sections also got some full-bodied scoring. In the prechoruses, I used the heavy brass like a Motown horn section, backing up the chorus and adding little licks. 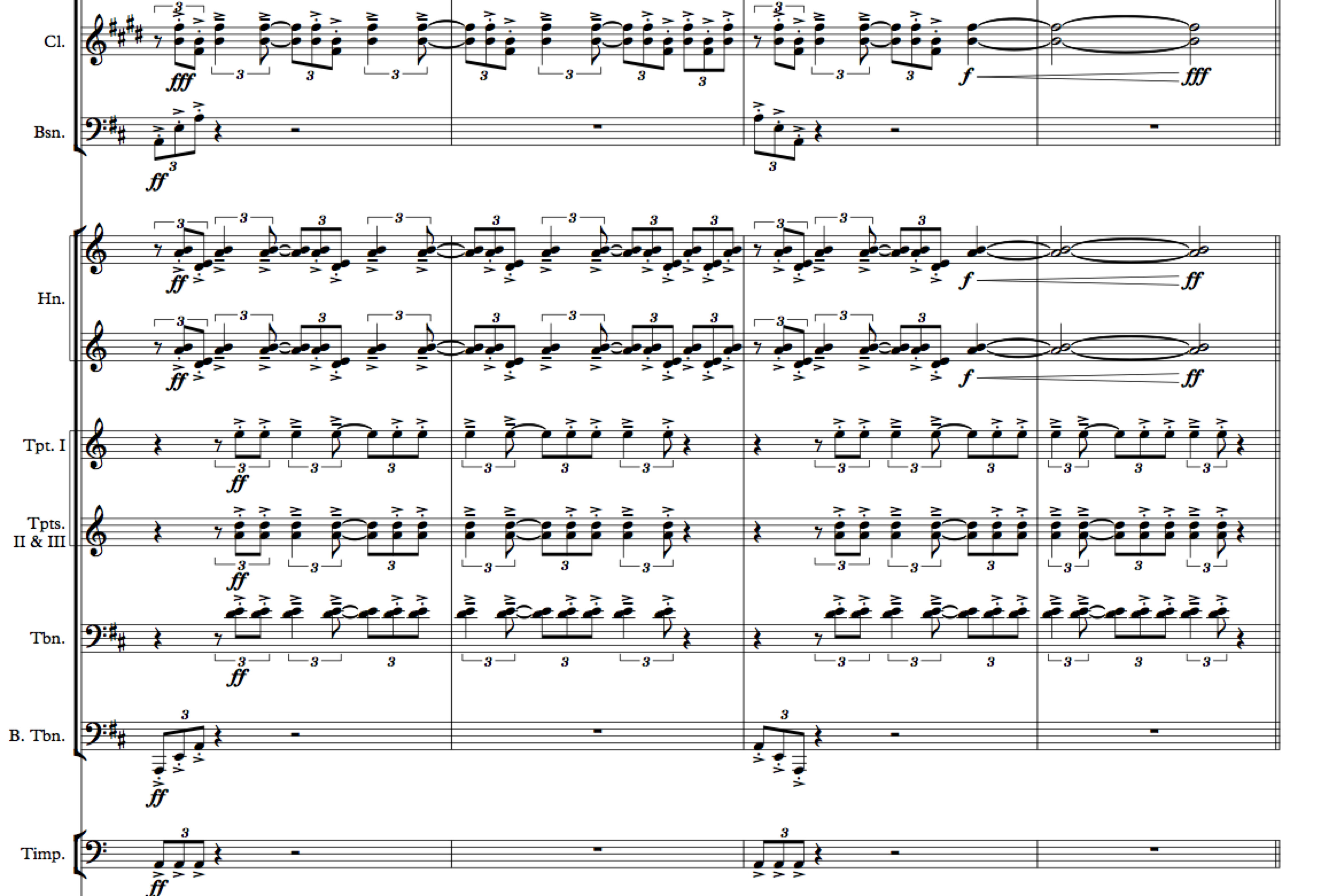 My favorite two moments in the song sit back-to-back in the score: the end of Chorus 3 and the Break. I replicated exactly what the synths are doing, only way more butch – clarinets and french horns laying down triplets and skipping rhythms, heavy brass playing across this rhythm with repeated chords. Bass instruments of bassoon, bass trombone, timpani, and pizzicato lower strings all hit the up and down triplet lick hard and heavy. That is going to cook. 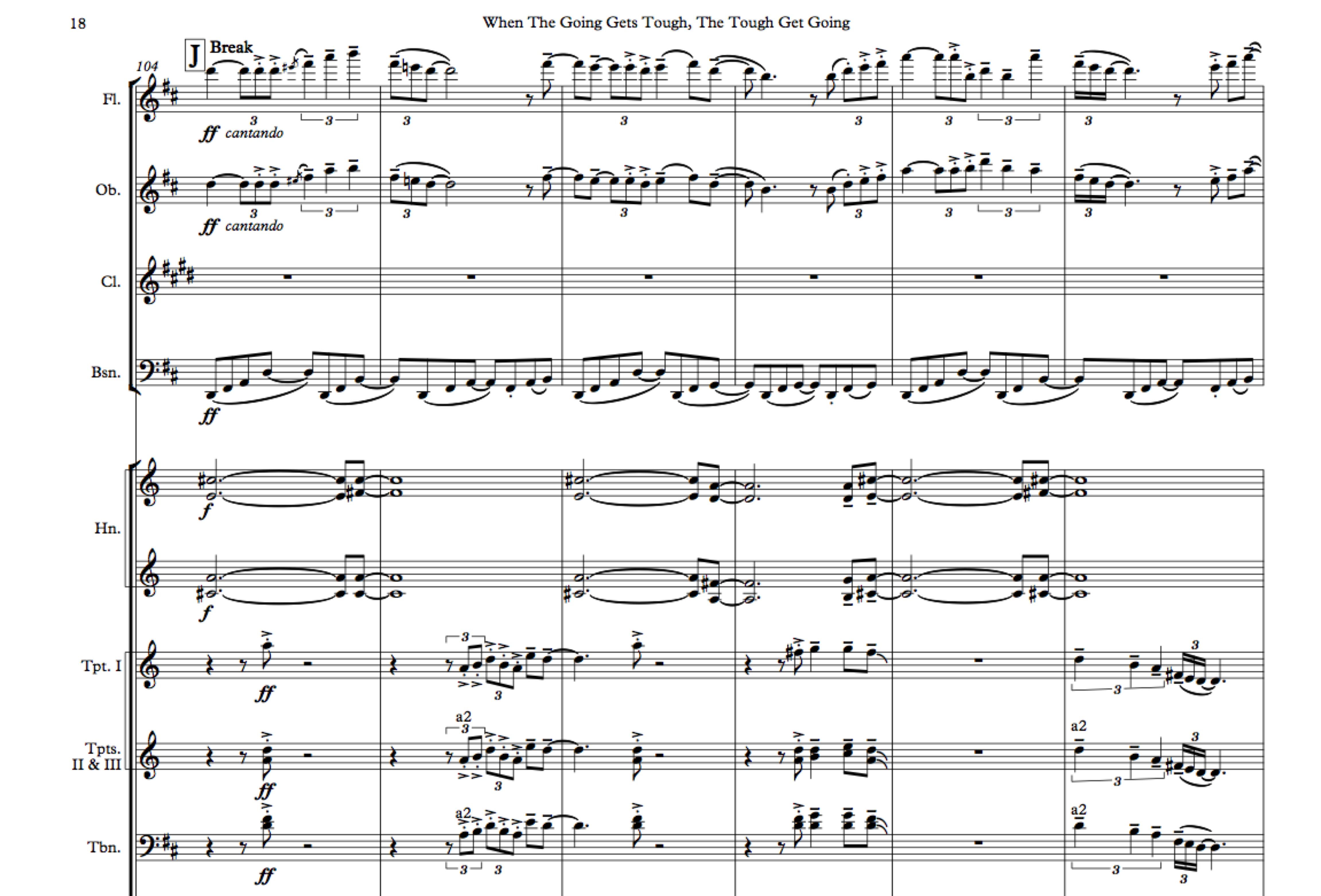 Then, for the Break, my challenge was to score something that could either play along with or replace the sax solo. I feel what I did there will do both jobs – bits of verse melody and sax licks in the upper winds and strings, counterpointed with commentary by my Motown horns, with french horns, violas and cellos playing harmony and bassoons and double basses covering that rolling shuffle bass that’s the real drive in this song.

Right about Chorus 4, I ran out of both time and focus for the day, and set things aside to take Tuesday off. But no time is really off in this business. Even if you’re locked in a dungeon with no computer for five days, you’ll still be taking mental notes, working things out, and getting ready for the next time you can get ahold of a pencil. In this case, the MD sent me an e-mail asking if I’d like an 11th song. Yes I would! Coincidentally, it was another one by Billy Ocean, his ballad “Sad Songs.” I listened to it a bit, thought up some ideas, and did a bit of catching up with odds and ends around my office. Little bits and pieces like paying myself, etc. Nothing important.

Wednesday morning I was right back on the job with Billy, taking on what turned out to be the most conceptually tricky part of the job: getting the orchestra all the way from the last chorus through to the Outtro. It was pretty intense, arranging a lot of various obvious gestures in subtle ways. But here I took some of the rejected approach for end of the Ronan Keating song from a few weeks ago (and seems like months ago now): building the strings in a slow chordal ascension over the final vocal vamp. Then I added one last shot of my Motown horns. It was a struggle, but 4 and a half hours later, I was e-mailing the score to the MD. It always goes to show that no effort is wasted in the end, so long as all efforts are well-crafted.

Which takes me back to tonight, a day later of enforced rest. But this cold seems to be passing, and I think I’ll be back on it by tomorrow, and this time rolling right into “Both Sides Now” by Mel C. I can’t wait (but I do need the sleep!).