Despite what several modern orchestration texts may claim, horn and trumpet players prefer not to have key signatures.

I picked up the Alfredo Casella orchestration text in an English translation a while back. Some of the presentation of principles is truly original, and I can recommend it as a supplement to a more thorough book like the Adler. However, there are several glaring inaccuracies with regard to his writings about horns. Apparently, each chapter was proofed by a different professor of its relevant instrument, so perhaps certain approaches and philosophy of horn playing may be different in Italy.

One thing he states about horn I have never found to be true: “At one time in all music for horn, as in other brass instruments like the trumpet, accidentals were not put in the part, nor was there a key signature. Each note, therefore, had to be altered where necessary. Today, however, this practice no longer exists nor can it be justified. The key is given as in any other instrument.”

This rings false to all practical experience I have ever had with real live horn players. Horn players don’t appreciate Professor Casella’s hornsplaining, nor do they care for key signatures either. Yes, they will play them without complaining, especially if they are professionals. But if you ask them what they really want, you’ll get anything from a polite suggestion to a lengthy dissertation on why key signatures are irrelevant to horn. Those of you who I wont convince with this tip should go check that key-signatured horn part that they got back from their premiere – there’s at least a 70% chance that the sharps or flats from the key signature have been marked on many notes – and a 5% chance that the horn players has drawn silly cartoons and frowny faces over it as well.

There’s a greater issue here as well, in that many orchestral composers are abandoning key signatures, particularly in film. I still use them – but I’m a tonalist/populist, and am fascinated by the unplumbed depths that yet remain in the exploration of keys and modes. Most of you are not, and more power to you if so – we need huge variety of compositions in a world with hundreds of thousands of times the concert music audience of the Classical Era. The bottom line is that you may be avoiding key signatures for anyone, so why not make the horn and trumpet the first in line in that case?

As to Casella’s pronouncement that “this practice” can no longer “be justified” – let’s honestly and fairly look at the entire scope of horn repertoire. A very slim percentage of it has key signatures – perhaps only 5-10%, if that, and most of that will be by composers who are not experienced with horn, or are getting a student reading, or honestly believe things like this (and no one has been polite enough to point out the fallacy).

The rest of horn repertoire is either modern with no key anyway; mid-Romantic to early Modern, in which the chromatic horn was under development; or Baroque to Early Romantic, composed for natural horn. Now imagine a horn player playing all of this repertoire without a key signature, and then getting a part with a key signature, particularly one with many sharps or flats. The impression they get is of a composer dipping their pinky toe into an idea and hoping the horns will fly with it. They’ll snort, or smile to themselves, or even think “whatever, let’s get it over with” – but they’ll seldom thank you for it. Trumpets get key signatures more often, but most players I’ve met are indifferent to them as well, and would rather see the accidentals marked on each note.

The important thing to remember, no matter what possibilities of chromaticism may exist with trumpet or horn, is that both instruments are based on the harmonic series. They play over a set of overtones that add up to a chord plus a fragment of scale at the top. Valve and piston positions are basically moving that chord up and down, and intersecting the musical idea with the right partial of the appropriate tubing extension is what gets you the sound. On top of that, a key signature seems almost arbitrary.

In the excerpt below from the 1st horn part of my orchestral legend Battle of the Mountains, you can see another advantage to no key signature – the horn may phrase alternately with sharps or flats, playing whichever represent the simplest in sequence, thereby leaving out double sharps and double flats. That’s more than a “justification,” it’s a great benefit in getting your piece played with accuracy. 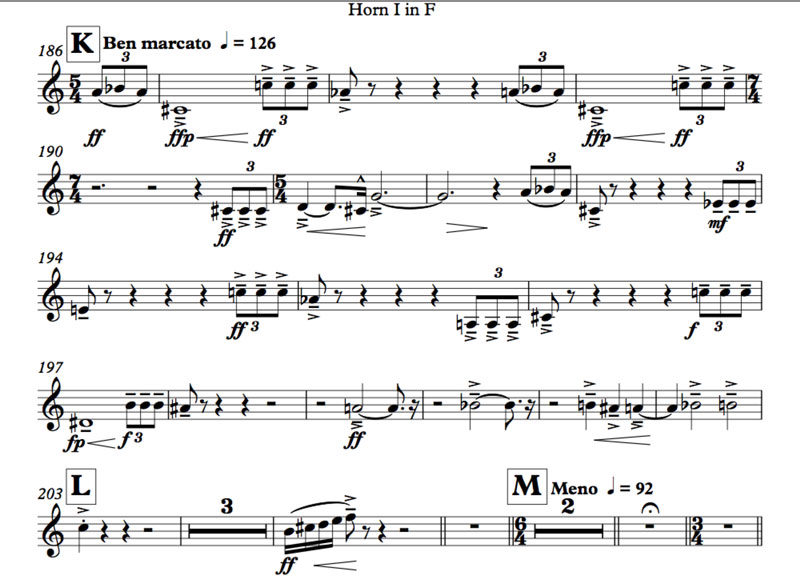 Added comment [by me]: One important thing I want to add here is that Sibelius automatically assumes that you want key signatures on your horn and trumpet parts in its templates. Entry-level users don’t know how to change this around, or why they should – meaning that key signatures automatically become the hallmark of an inexperienced composer. So right there, with that one simple act, the problem is multiplied several hundred thousand times.

« Horns - Slurring Up vs. Down Video Tip of the Week: Reading Natural Brass »

One response to “Horns – No Key Signatures, Please!”